150 years ago was born the man most responsible for the systemization of the Karate-Dō we know today. Gichin Funakoshi was born in the district of Yamakawa-Cho in the royal Okinawan capital of Shuri, on November 10th, 1868 and began to study Karate at eleven under the two top masters of the art at that time, Azato and Itosu.

He had a rich history, widely described everywhere, including his autobiography, so we will shortly approach some passages in his life so that the reader can get an idea of the principles that shaped Shotokan Karate.

The only son of Gisu, a samurai/lower-ranking official, Gichin Funakoshi was born prematurely and was a sick baby. His family agreed that he was not destined to have a long life and they took special care of him.

His grandfather Gifuku, a noted scholar, taught him the Confucian classics, essential education for the noble class (shizoku), which shaped Funakoshi's teachings on morality in Budō.

At the primary school, he became close friends with a classmate, son of Yasutsune Azato, one of the greatest Karate experts in Okinawa who later became Funakoshi's instructor.

When the government banned karate, sessions had to take place in secret at nights and students were strictly forbidden to tell anyone that they were learning the art. Azato's house was far away from where Funakoshi was living, but his enthusiasm for learning the art made the long walk shorter, and during that time he felt his health improve tremendously.

Funakoshi hoped to be a physician, and in fact, he passed the tests, but he was excluded from medical school because he would not shave off his keimochi topknot, the traditional hairstyle symbol of maturity, virility, manhood, abolished by the Meiji government.

At 21 years old, he eventually cut his hair to get a position as an assistant instructor in a primary school. When he reported to his parents, his father an mother became angry and ashamed. He followed this career for 30 years and turned down promotions to stay in Shuri and do not interrupt the karate training.

Itosu, from a shizoku (noble) family and a good friend of Asato, also taught the art to Funakoshi during the sessions in the backyard of Asato's house and observing the discussion of his masters, he learned the art deeply in its spiritual and physical aspects.

Master Itosu passed away when Funakoshi was 47. He and other senior students formed a pact to take Karate out of Okinawa and introduce it to the world. Then in 1922, the opportunity to introduce Okinawan Karate to Japan presented itself through the invitation of the Japanese Empire to demonstrate Karate in Tokio.

After the demonstration, Jigoro Kano, the founder of Judo, convinced Funakoshi to extend his stay and, later, he decided to stay indefinitely and opened the first Karate school, the Shoto-Kan. He faced a difficult time because the Japanese looked down upon Okinawan Karate and considered it a savage art. During this rough times and teaching a few students, he worked as janitor and handyman to survive.

As time passed, Funakoshi managed to spread Karate among the more educated and understanding of Japanese society and 1930s were the golden era of the Shoto-Kan, reaching the universities and became widely respected.

In 1945 the WW2 came along with firebombings. Shoto-Kan school was burned to the ground in the Tokio fires. At 78 years old, Funakoshi survived as a homeless refugee by foraging for scraps of seaweed on the beach, because he could not find anything else to feed his starving wife. He lost his son, Gigo Funakoshi, and his wife shortly afterward.

At the age of 89, Master Funakoshi saw his surviving students rebuild the Shoto-Kan, keeping the plan of spread Karate worldwide moving forward.

In his leisure time, Funakoshi was a calligrapher, a poet, and writer. He authored four books: Karate Jitsu, Karate-do, My Way of Life, Karate-do Kyohan: The Master Text, and Karate-do Nyumon.

From born prematurely and a sick baby to a strong man with noble spirit and character, Master Funakoshi set an austere standard very few of us would want or could to equal.

As the most widely practiced style, Shotokan is considered a traditional and influential form of karate do, and it is estimated to be practiced by more than five million people around the world. Does The Original Shotokan Karate Continue To Be Taught? 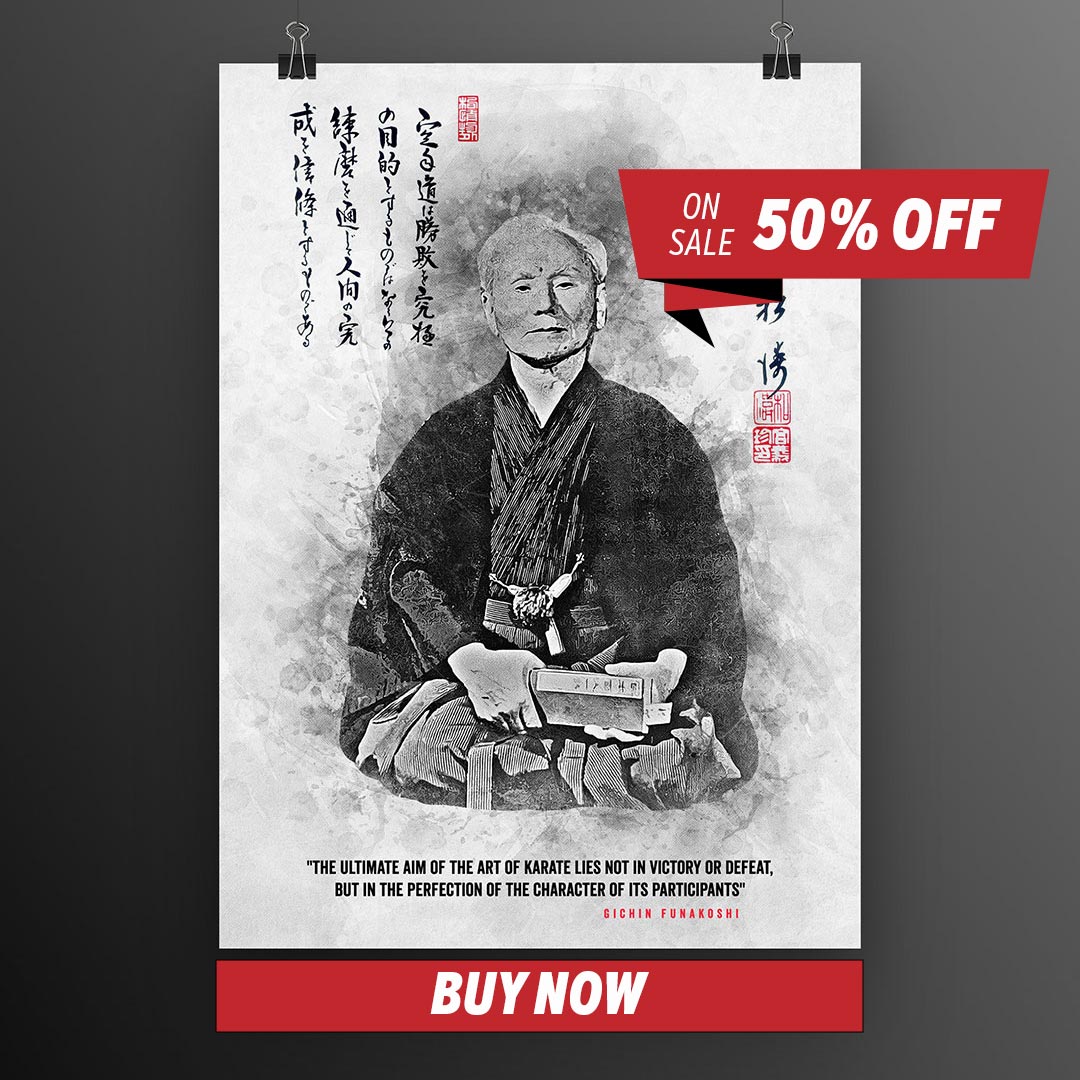